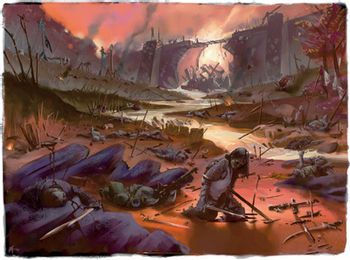 Black Friday at the local mall was unusually calm this year.
"All dead... all rotten. Elves and men and orcses. A great battle, long ago. The Dead Marshes... yes, that is their name."
— Gollum, The Lord of the Rings: The Two Towers
Advertisement:

When a great battle, massacre, or terrible cataclysm occurs, the people involved may someday forget, but in some cases the land doesn't. Sometimes a place becomes contaminated, or possessed, by the misery that transpired there. Vegetation fails to grow, beasts and birds become sick or mad. The land is cursed, forbidden and dangerous.

A Corpse Land is called this mostly because the bodies of the dead are ever present. No matter how many are buried, more seem to just appear, still bloody and disease-ridden, attracting scavengers that become puppets of the ghosts that haunt the place. In fantasy stories, Necromancers are drawn to such locations, and no matter how noble the armies involved may have been, they become twisted and malevolent, even attempting to re-enact their final moments with travelers who pass by.

In reality, openly decomposing bodies are only disease vectors for a relatively short time — once animals and bugs have cleaned the bones and the tissue has been absorbed into the soil, all that carbon and minerals can actually promote plant growth. However, wars fought with modern technology — or magic — may leave a lot of stuff behind that's more dangerous than bodies, and the psychological associations of a place of mass death may keep people away better than any threat to their health.

A hidden form of this may be a Field of Blades. See also Atop a Mountain of Corpses, Nothing but Skulls. May overlap with Polluted Wasteland or Unholy Ground.

Not to be confused with Giant Corpse World, a land made of a corpse.