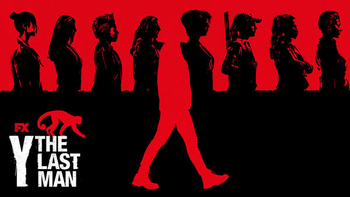 Y: The Last Man is a post-apocalyptic drama from FX Networks, based on the acclaimed comic book of the same name. The network released the first three episodes on Hulu on September 13th, 2021.
Advertisement:

On an ordinary day, with no warning, every mammal on the planet with a Y chromosome suddenly dies. The world is instantly plunged into sheer chaos with millions more women dying in the initial wave of crashes, etc.

Weeks later, it turns out two mammals with Y chromosomes have survived: eccentric would-be escape artist Yorick (Ben Schnetzer) and his pet monkey Ampersand. Now, paired with Secret Service agent 355 (Ashley Romans) and geneticist Dr. Allison Mann (Diana Bang), Yorick is trying to discover the reasons for his survival, the source of the plague and get to his girlfriend Beth (Juliana Canfield), trapped on the other side of the world.

But there are other forces who want Yorick for their own means...

On October 17, 2021, the series was canceled before its first season ended. According to news sources, FX made the decision due to COVID-19-related production troubles and changes made for the showrunner and cast. Further attempts to find a network willing to back a potential second season stopped in Febuary 2022.