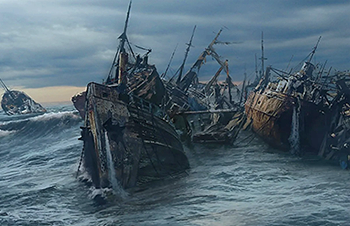 This place doesn't exactly float my boat.
"Yikes, did we get blasted into the Bermuda Triangle or somethin'? You see all that gnarly wreckage out there?"
— Funky Kong, Donkey Kong Country: Tropical Freeze
Advertisement:

An area (could be an abandoned harbor, the bottom of an ocean or a Lagrange point) which contains a number of craft (sea, air, space or otherwise) in varying states of disrepair. It might be just a few sunken ships lying near each other on the ocean floor, it might be a giant conglomeration of space derelicts rammed together in horrible ways over thousands of years. The crews of all these vessels long ago died or abandoned their ships... probably.

Of course, all sorts of important plot-related things could be hidden in such a place — pirate gold, the lost plans to a Forgotten Superweapon, spare parts for the heroes' own badly damaged ship, an unexplainable Distress Call — and there is no end to the possibilities of having mutant enemies or ancient security systems that get between the heroes and their goal.

Between the idea of exploring tumbling derelicts crammed with ancient technology, apparently dead hulks suddenly coming to life, a hidden base made of ancient battleships linked together, a potential Cool Plane or Cool Boat for the heroes to resurrect, the explorers running into weird indigenous creatures or the mutant cannibal descendants of the original crews, the kind of dread powers that can gather all these vessels together in the first place, and simply the whole idea of abandoned, empty derelicts, the Derelict Graveyard is insanely cool.

Compare Ghost Ship. See Also The Bermuda Triangle and Saharan Shipwreck. If the vehicles are awaiting disposal and not just left there, you're Down in the Dumps. If you're looking for a graveyard for humans, chances are you're looking for Creepy Cemetery or Big Boo's Haunt, although there's certainly room for overlap.