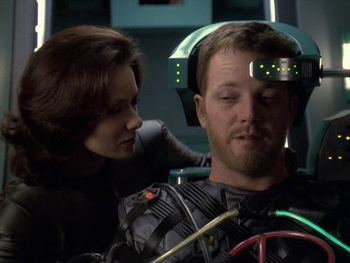 Tom Paris under the mind-control of "Alice" (that or he's super baked, it's hard to tell).
The crew of Voyager comes across a merchant named Abaddon who is selling all sorts of items in his derelict ship junkyard. Through the search of the junkyard, Ensign Tom Paris comes across a shuttlecraft that he thinks is a real beauty and is worth selling off his jukebox to acquire. During his restoration of the derelict ship that he named Alice after a girl in the academy that wouldn't give him the time of day, Paris tries out the neural interface briefly before the ship loses power. After he goes to bed, the ship comes to life again, having used the neural interface to scan Paris' mind and create a female persona that would interact with him. Over the course of the next few days, Paris' relationships with his closest friends and with Lt. B'elanna Torres would deteriorate as all of his attention would be fixed on Alice, with B'elanna jokingly referring to the ship as "the other woman". However, when B'elanna notices that some important key components of Voyager have been stolen by Paris to fix up Alice, the shuttlecraft responds by sealing her up inside and cutting off all the oxygen. Paris soon realizes that the Alice persona now has a hold on him and tries to escape its grip, but it forces Paris to leave Voyager on a course that he has plotted for the ship: straight into a particle fountain, which is considered dangerous. With the help of Abaddon, who turns out to be a former victim of Alice, the crew of Voyager manages to rescue Paris from the ship by having B'elanna serve as a mental distraction for Paris before it is destroyed by the particle fountain.