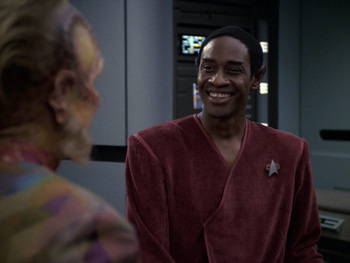 Anyone else really uncomfortable right now?
While returning from a diplomatic mission with Neelix, Tuvok is attacked by an unknown weapon that causes severe neurological damage. The Kesat investigator, whose species had recently closed dealings with Voyager, claims it's the work of the Ba'Neth, a shadowy, xenophobic race obsessed with protecting their anonymity. His government denies their existence, but they're real, all right; their weapon has forced Tuvok's brain to rewire itself from a totally Blank Slate...