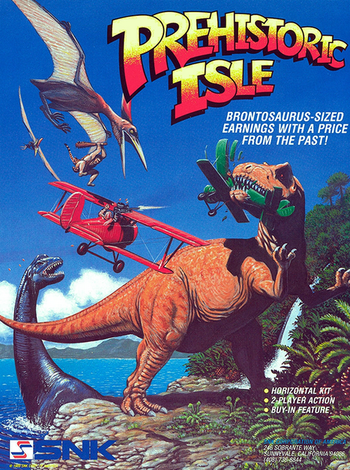 A pair of arcade Shoot 'em Up games by SNK. It's basically your usual side scroller shooter but with Dinosaurs!

The first game, Prehistoric Isle in 1930 was released in 1989 and is set on an island in The Bermuda Triangle. The player controls a biplane, blasting hordes of prehistoric creatures, while aquiring power-ups in the form of a device that rotates around his craft blocking enemy shots and providing different modes of fire.

The 1999 sequel, Prehistoric Isle 2 is set in modern times when even more dinos and prehistoric beasties invade a city, this time the player controls a helicopter and it also includes the mechanic of rescuing civilians.

Unrelated to Prehistorik, another game of the period.