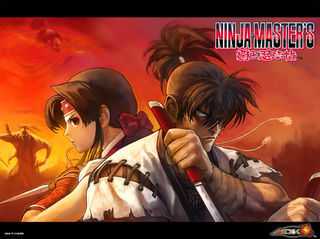 Ninja Master's Haoh-Ninpo-Cho (ニンジャマスターズ ～覇王忍法帳～, Ninja Masutāzu ~Haō Ninpō Chō~, "Ninja Master's Scrolls of the Supreme Ninja Arts"), most known as just Ninja Master's, is a ninja-themed competitive fighting game produced by ADK originally released in 1996 for the Neo Geo arcade and home platform. It was later featured in the 2008 compilation ADK Tamashii for the PlayStation 2. It was the sixth and final fighting game produced by ADK, following the four games in the World Heroes series and Aggressorsof Dark Kombat.

The story revolves about the mysteries surrounding a cruel demon named Haoh. Years ago, the warlord Oda Nobunaga ruled all of Japan with an iron fist and is said to have been in cahoots with Haoh himself until he died... so when a reborn Nobunaga appeared long after his supposed death, several warriors set out to defeat him and Haoh. One of them is the protagonist Sasuke, a ninja whose father was killed by Haoh and has abandoned his clan to exact his revenge.

Ninja Master's follows the conventions of many previous 2D fighting games released for the Neo-Geo. The player must defeat their opponent in combat in a series of best-two-out-of-three matches. Characters can change between using the character's weapon or fight hand-to-hand during the middle of combat. It also has a super meter similar to The King of Fighters and other fighting game series.