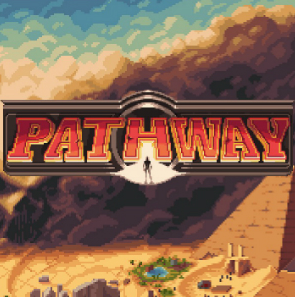 The year is 1936 and Nazi activity is increasing in intensity by the day.
Tirelessly, they send their expeditions into the vastness of the deserts and the inhospitable mountains of the Middle East.
North Africa, Arabia — what could the armies of evil be looking for?
— Codex - Introduction section
Advertisement:

Pathway is a Turn-Based Tactics Roguelike released on April 11, 2019 on PC, Mac, and Linux, developed by Robotality and published by Chucklefish. The game is set in 1936's North Africa and Middle East, with secret wars between Nazi Germany and a mysterious Sisterhood competing for Artifacts of Doom. The story begins when the Non-Entity General recruits a team of adventurers to rescue a friend of theirs, Morten, who has been captured by the Nazis. What follows is a race to retrieve four ancient artifacts, each with nigh-supernatural powers, as the adventurers must contend with Ghostapo Nazis and Necromancer Cultists, along with their own dwindling supplies.

As a Roguelite, the game procedurally generates a map of nodes, some of which have their events revealed. The player's mission is to travel to the X at the end of the map, while overcoming ambushes, special events, and the typical annoyances of your misguided mercenaries. Characters are pre-generated only and have a mixed variety of skills and abilities which can be used in combat and during events for a major advantage.

Each character can equip a primary weapon, a secondary support item, and armor. Armor in this game directly subtracts direct damage from attacks, but every attack shears a portion of the armor's durability - with some attacks dealing more armor damage than others- weakening its effectiveness until it is repaired. Each weapon type has its own damage output, range, and unique weapon ability. You also need to manage your fuel, ammo, and supplies; if you run out of fuel, you'll lose health when walking to the next node on foot, if you run out of supplies you won't be able to use your medic bags/repair kits/grenades, and if you run out of ammo, you're screwed (unless you brought knives or really like punching).

The game has sixteen player characters available, though only six are playable at the start. The rest must be unlock by completing challenges (kill 100 Nazis, kill 5 enemies with a bleeding effect...). Party size ranges from 2 to 4.

The story is split into 5 campaigns ("adventures"); finishing one for the first time unlocks the next one. Experience levels, money, and loot are kept between campaigns. The first adventure happens on a single worldmap, while the other missions involve several stages.