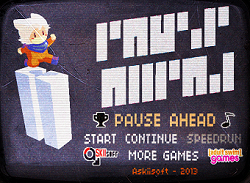 What an innocent-seeming game!
I awake in a dark place.
The number '00' is branded on my palm.
My thoughts are not on how I arrived,
But how I escape.
— ???
Advertisement:

A Molyjam inspired platformer from Askiisoft seeks to answer the question, "What if the pause button was a weapon?"

An indie platforming game made in 2013 by askiisoft. In this game, you play as a surprisingly adorable humanoid wolf creature who attempts to escape from within a mysterious building.