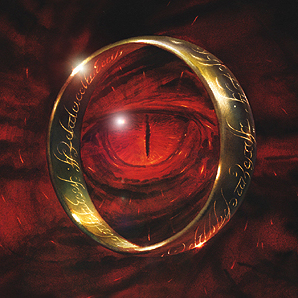 Oooh, shiny! note WARNING: Tampering with the One Ring may result in invisibility, longevity, rushes of euphoria, seeing the ghostly images of the Nazgûl, voices in your head that may or may not belong to the Ring, complete and utter dependence on the Ring, loss of clear thought and sanity, mutation into a spindly naked ring junkie, and eventual undeath. Do not swallow.
Image

. Used with permission.
Advertisement:
Pete: It's always ultimately death. I mean, artifacts never release a plague of tickles or an epidemic of kittens.
Jane: Some do. They end badly, too.
— Warehouse 13

Sub Tropes include the Tome of Eldritch Lore, Evil Weapon, Evil Mask, and the Summoning Artifact. Occasionally doubles as an Artifact of Death. More often, it is an Amulet of Dependency. Often overlaps with Happy Fun Ball when the artifact appears to be something harmless or mundane. The Soul Jar of an evil character almost always doubles as one of these. May also be the can of Sealed Evil in a Can. Contrast its equal/opposite Artifact of Hope. See also Sentient Phlebotinum and Holy Is Not Safe when the artifact was made by the good guys but still dangerous.

"This is the One Ring"

Gandalf verifies that Bilbo's Magic Ring is in fact the One Ring of Power forged by Sauron and tied to him.

"This is the One Ring"

Gandalf verifies that Bilbo's Magic Ring is in fact the One Ring of Power forged by Sauron and tied to him.