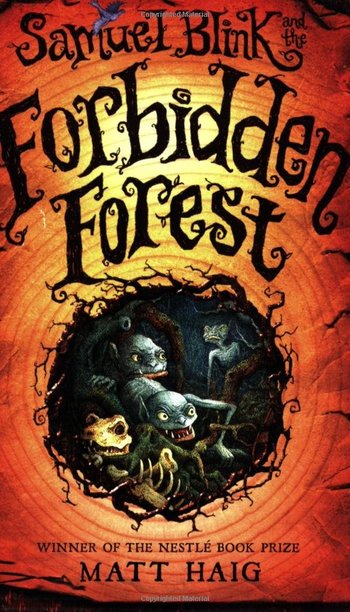 "There is a place you must never enter. It is a place where evil has many faces, and where creatures of myth live and breathe. And kill. It is a place beyond dreams or nightmares—a place that has so far been too feared to be called anything at all. Now, in this book, I will explain the unexplained, and give fear a name that suits it well. That name shall be Shadow Forest, and it will plant terror in your hearts."
—Professor Horatio Tanglewood
Advertisement:

Samuel Blink and the Forbidden Forest (also known as Shadow Forest) is a novel written by British novelist Matt Haig.

The book is about Samuel, regular, 12-year-old boy and his sister who goes to live with his eccentric aunt after his parents in a car crash.

His aunt's lengthy list of rule contain two that stand out in particular: do not enter the forest, and do not enter the attic. Naturally, this just stokes his curiousity. When he breaks the latter, he finds a book, called The Creatures of Shadow Forest, written by Prof. Horatio Tanglewood, describing supernatural, incredibly dangerous creatures within said forest.

The question is, why are they so dangerous?