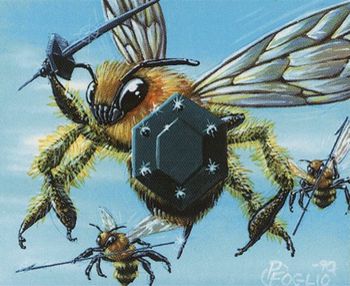 Bee-ware of the Scary Stinging Swarm soaring straight into the slaughter with spears and swords and shields!
Advertisement:

Just as often as they can be seen portrayed positively, bees can as easily be depicted in negative light. Their intimidating black-and-yellow coloration, painful stings, aggressive and overly territorial nature, tendency to attack in swarms, and their sheer determination in pursuing the perceived threats to their hive left a long-lasting impression of a dangerous insect that should not be messed with.

As such, it's not uncommon to see bees depicted as menacing and dangerous. If they are non-sapient, they will be featured as aggressive, vicious animals, often known to attack in swarms en-masse; while sapient bees can range from simple bullies to vile totalitarian Control Freaks obsessed with bringing everything and everyone under their control. Characters with bee motifs, whether simply using the imagery or actually closely associated with bees, are not always pleasant, either.

Can often be seen in the Hornet Hole or living in Stock Beehives. May be under the Hive Mind.

If Larry brushes a bush of bees, they take him away with their incredible strength to their queen, which results in a game over.

If Larry brushes a bush of bees, they take him away with their incredible strength to their queen, which results in a game over.