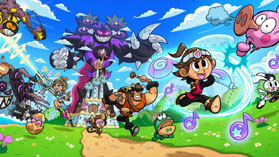 Harmoknight, known as Rhythm Hunter: Harmoknight in Japan, is a Rhythm/Platformer created by Game Freak and their first non-Pokémon game since Drill Dozer. The story follows a warrior-in-training named Tempo as he adventures through the musical realm of Melodia.

A meteor has crash landed on Melodia, causing its creatures to go berserk. Along with it, aliens called Noizoids begin to arrive, wreaking havoc on the planet. Led by their leader Gargan, the Noizoids take over various parts of Melodia, spreading their noise wherever they go.

Tempo, having found a magical staff in the belly of a beast, must bring it to Symphony City to give to a Harmoknight who could put an end to Gargan and his crones. Along the way he meets Lyra, a sharpshooting archer, and Tyko and Cymbi, who use drums and cymbals to take down their foes. Together, they reach Symphony City, only to find out that Gargan had captured its princess, Ariana, putting everyone within the city into a deep slumber afterwards. With no one else to stop him, it's up to Tempo and his friends to find Gargan and defeat him themselves.

This game shows the following tropes: