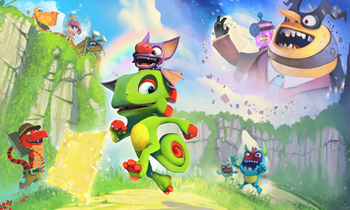 If any of this looks familiar, it's supposed to.note From middle going clockwise: Yooka the Chameleon and Laylee the Bat, Trowzer the Snake, Rextro Sixtyfourus, Dr. Puzz, Kartos, Dr. Quack, and Capital B with two Corplet Grunts
Advertisement:

Yooka-Laylee (working title: Project Ukulele) is a 3D "Collect-a-Thon" Platform Game that serves as a spiritual successor to the Banjo-Kazooie series. The title was developed by Playtonic Games, a group of former key personnel from Rare — specifically, the same people behind such games as Donkey Kong Country and the aforementioned Banjo-Kazooie. The game released on April 11, 2017 for Windows, Mac OS X, Linux, Xbox One, and PlayStation 4. A Nintendo Switch version would release several months later on December 14, 2017.

After a book they found is sucked up by the evil Hivory Towers Corporation, best friends Yooka (a chameleon) and Laylee (a bat) enter their headquarters and find themselves fighting their way through the vast company grounds and the levels they contain in order to reassemble the book's lost pages. The game intentionally shares many gameplay elements with the Banjo-Kazooie series, but the most notable difference is that its collectible Plot Coupon, Pagies, can not only be used to unlock more worlds and thus reach the Final Boss, but also expand each world; thus making them bigger and adding new challenges, which in turn grants access to even more collectibles, including other Pagies.

Just like similar instances of creators effectively reviving their old series due to another corporation holding the rights, Yooka-Laylee was crowdfunded through Kickstarter. The campaign was launched

on May 1, 2015, reaching its target goal (and, in fact, it exceeding it) on the same day. The campaign ended the following month with a total of £2,090,084 (not including PayPal donations). A teaser Vine can be seen here.

Yooka and Laylee are also Guest Fighters in the games Brawlout and Mighty Fight Federation while they feature as a playable duo for a free DLC in Volta-X.

On June 7, 2019, a new 2½D installment, entitled Yooka-Laylee and the Impossible Lair (this time evoking the aforementioned Donkey Kong Country series), was announced. The trailer can be viewed here

. An extended gameplay demonstration can be viewed here

Trowzer: Thissss next move is banned in three different modern game genresssss...
Laylee: Is it the quality assurance move?
Trowzer: Of co%3rse not.