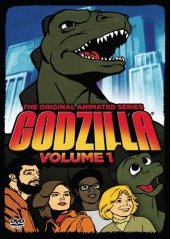 The giant radioactive dinosaur from the Japanese films headlined this animated Action Series, co-produced by Hanna-Barbera and Toho for NBC in United States in 1978, and TV Tokyo in Japan. It is an animated adaptation of the Japanese Godzilla films produced by Toho. The show continued to air until 1981, for a time airing in its own half-hour timeslot until its cancellation. It's now available to watch on the official Godzilla YouTube channel hosted by Toho here

Here, Godzilla had four human friends and a mischievous nephew, Godzooky. The series follows the adventures of a team of scientists on the research vessel called the Calico, which is headed by Captain Carl Majors. The rest of the crew include scientist Dr. Quinn Darien, her nephew Pete, and her research assistant/the ship's first mate, Brock. The group often call upon Godzilla by using a special communicator when in peril, such as attacks by other giant monsters or impending natural disasters. Godzooky is also able to howl to summon Godzilla.

The supporting segment, Jana of the Jungle, has its own entry.

See Godzilla: The Series for The '90s' Godzilla 'toon.