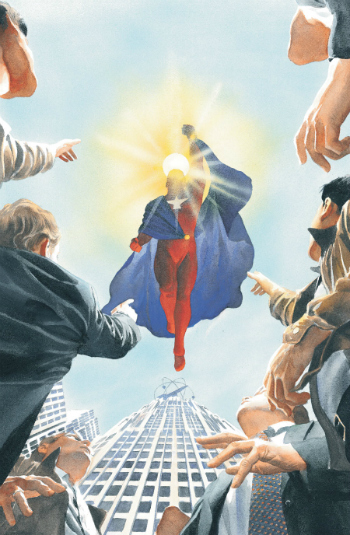 "They said don't be a dope, don't transfer, not there. They said Astro City's crawling with costumes, it's too dangerous. Think of the girls. But every big city's got some superheroes... And anyway, I had to get away, get clear — before I wallowed so long I wound up drowned. I had to make a fresh start."
— Ben Pullam's pre-title Inner Monologue, Welcome to Astro City
Advertisement:

Astro City is a comic book series (or, more accurately, sequence of mini-series and ongoings) written by Kurt Busiek and first published in 1995. It was originally published by Image, then moved to Homage/Wildstorm, staying with Wildstorm when it was bought by DC. When DC discontinued the Wildstorm imprint, the title was moved to Vertigo.

The titular location is home to a great many Super Heroes. The series does not have one continuing arc or viewpoint character. The stories vary in length, from one to two issues up to a seven issue arc. Each story tends to focus on a different group or character, often taking the viewpoint of minor characters watching events unfold.

Astro City is treated in a more or less "realistic" fashion, though the creator gently rejects the term "realistic", often focusing on the emotional and personal lives of the heroes, or of those who just happen to live in the same universe as superheroes and villains. This puts it in the same class as Watchmen, The Golden Age, Kingdom Come, and Busiek's own Marvels.

The in-universe Back Story of Astro City goes back to at least the 19th century, with heroes like the Old Soldier (believed dead in 1863) and Ironhorse, the Human Locomotive (first seen since 1862), and probably to prehistory, as Coyotl appears to have occurred in pre-Columbian America.

The list of superheroes and villains (individuals and groups) mentioned is really, REALLY long. The character page is here.

After an indefinite hiatus due to Busiek's health issues, the comic resumed publication in June 2013 as an ongoing monthly series published by DC Comics. It was part of their Vertigo line, but divorced from the new, Vertigo/Wildstorm-inclusive DCU. The monthly ended in June 2018, with the series initially planned to continue as original graphic novels, but following a number of internal changes at DC, the creative team decided to take the series over to Image Comics, bringing it together with the rest of Busiek's creator-owned titles. The entire back catalog of Astro City collections was made available digitally in August 2021, and a new one-shot was released in March 2022. The series is on hold for the time being, but more is planned.

On March 23, 2018 it was announced that Fremantle Media would be adapting Astro City for television. Busiek later reported in the 2022 one-shot that the TV series was now with another company.