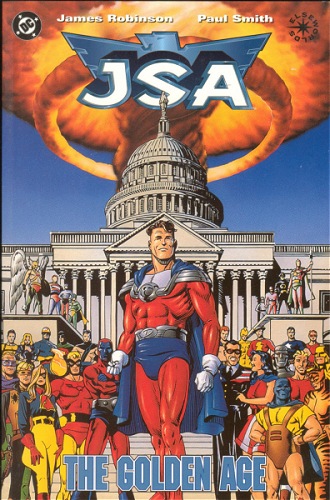 The Golden Age of Comic Books ends with a bang.
Advertisement:

It tells the story of The DCU's Golden Age heroes immediately after World War II, their problems with the rising tide of McCarthyism and government corruption, and a super-powered take-over of the US Government.

The series is told primarily from the viewpoints of Liberty Belle, Manhunter, the original Green Lantern, and Johnny Quick. The story plays out in a "realistic" fashion, similar to Watchmen, but not quite as dark.

Most of the Golden Age heroes have retired for various reasons, and are making new careers for themselves, when an amnesiac Manhunter makes his way back to America from parts unknown. As events unwind, the heroes have to deal with conspiracy, government corruption, and horrific discoveries about the war.

The series touches on most of the major Golden Age heroes, and many of the minor ones. Notable absences from the line-up are Superman, Batman, and Wonder Woman, despite all three originating in The Golden Age of Comic Books.

The Golden Age is nominally a What If? story, but elements of the series have snuck into Canon anyway, most notably Ted "Starman" Knight's nervous breakdown, a major part of Starman's backstory. It was eventually retitled JSA: The Golden Age to connect the series to the Justice Society of America ongoing series of the late 1990s and early-to-mid 2000s.

Not to be confused with the prose trilogy by John C. Wright.