Dork in a Sweater 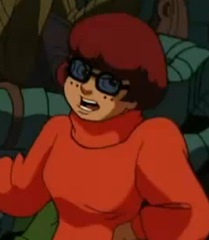 A character who wants to look dangerous has several choices in outerwear — long swishy coats if you want to look dashing and mysterious, leather jackets appeal to the James Dean wannabe in all of us, stylish dark suits look aloof and professional — but not sweaters.

Whether because of their fuzzy texture or sweaters' association with gifts from one's grandmother, sweaters do not look intimidating. In fiction, a character who wears sweaters frequently is often some variety of nerd, otherwise cute, or at least approachable and non-threatening. Sweater vests, in particular, are normally a sign of extreme nerdiness, and the look is often paired with Opaque Nerd Glasses for the same reason.

Keep in mind, however, that while Dorks In Sweaters don't look dangerous, that does not mean they are necessarily harmless. The various Hidden Badass tropes may apply. A character may look like this when he's (or she's) obligated to wear the Homemade Sweater from Hell. This trope can overlap with Sweater Girl if the lady in question is more of a Hot Librarian than a conventional bombshell, and Cute Oversized Sleeves if the character is adorably dorky. Also The Smart Guy of a group usually could dress this.