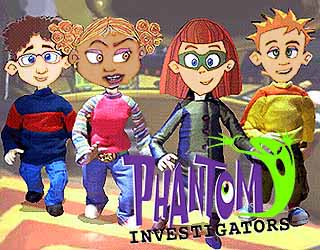 "Phantom investigators"
note From left to right:Casey, Kira, Daemona, and Jericho.
Phantom Investigators! When the going gets eerier, we are superior!
Advertisement:

Phantom Investigators was a show created by Stephen Holman and Josephine T. Huang with their studio, (W)Holesome Products, Inc. (already known for the KaBlam! short series, Life With Loopy), produced by Sony Pictures Television (then known as Columbia TriStar Television) for Kids' WB! in 2002. The show was known for mixing Stop Motion and traditional 2D hand drawn animation, as well as live action puppetry.

The show featured a team of four junior-high aged paranormal investigators who would solve supernatural mysteries around their hometown of San Francisco. The cast was comprised of the team leader, Daemona, a telekinetic, Jericho, a telepath, Kira, and a shapeshifter, Casey.

The show premiered on May 25, 2002 and became the highest rated show in its 11:30 AM timeslot on Saturday mornings. While it looked like Kids WB had a new hit on their hands, the network was pretty upset over the show eventually slipping in ratings with younger male viewers while it grew with female viewers (all despite the fact that the network picked up the show in order to gain more female viewers). Thus, the show was cancelled with only one season of thirteen episodes. The sudden cancellation caused Sony to stop funding production, preventing any other networks potentially picking it up. And due to WB's dissatisfaction with it not doing as well in the specific demographic that they wanted, only six episodes aired in the United States, with the show quietly being yanked off the schedule on June 29, 2002. The remaining seven episodes all premiered outside the US on Teletoon in Canada and various international feeds of Cartoon Network where available. It remains a very obscure series due to its very short run and lack of an official commercial release, but it has its own small following- especially among Life With Loopy fans that wanted to check out the studio's other work.

Has a character page in need of some work.

Phantom Investigators! We'll list your tropes 'cause we're no dopes!: