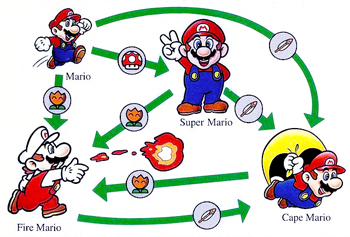 The case in video games where picking up one weapon or powerup results in losing another. This makes control schemes simpler, but may be more annoying. This is particularly aggravating if the game allows you to increase the level of a weapon or powerup only to lose it later. In some scenarios, if the player is required to possess a certain powerup to proceed, other powerups must be avoided at all costs, or else the player will have to backtrack to a previous area to swap for the correct one.

More merciful games allow the player to merely "drop" the old weapon rather than it simply vanishing into nothingness, allowing the player to easily swap between them (like an Inventory Management Puzzle with a limit of one weapon).

This trope doesn't apply to cases that involve explicitly choosing or trading between two weapons (like the choice of three starters in the Pokémon games).

Contrast All Your Powers Combined.