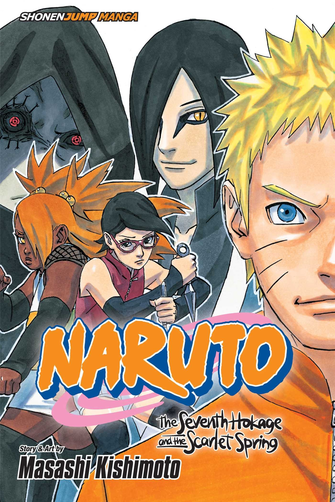 Who is Sarada's mother?
Advertisement:

Naruto Gaiden: The Seventh Hokage and the Scarlet Spring (or just, Naruto Gaiden) is a Post-Script Season Spinoff Mini Series sequel to Naruto, written and drawn by series creator Masashi Kishimoto. The series received an animated adaptation as part of the Boruto anime.

The series takes place a few years after the Distant Finale to the main series and is set sometime before the events of Boruto: Naruto the Movie. It focuses on Sarada Uchiha, the daughter of Sasuke, who finds herself asking questions about her family. What's her father like? Why did he leave when she was a baby? Why has he never been around while she was growing up? And also...is Sakura really her mother, or is it Sasuke's former teammate Karin?

A series of events has her leaving the village in hope of seeing her father, and answering some of the questions she has. But at the same time, Sarada is pursued by a mysterious hooded figure and his "son": a young boy named Shin. Both of them have the Sharingan, despite the Uchiha being all but wiped out many years ago...