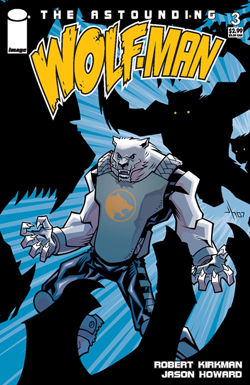 When Gary Hampton is mauled and left for dead, his life takes a drastic turn! Gary is cursed -when the moon is full he transforms into a beast of the night - a werewolf! This curse will not be used for evil - witness the birth of the world's most unlikely new superhero.
Advertisement:

Created by Robert Kirkman and Jason Howard, this comic book begins with a fairly simplistic concept: a werewolf superhero. What most product descriptions don't tell you, however, is that over its short-lived 25 issue run (July, 2007-November, 2010), the book quickly veers all over the place into multiple unexpected (and arguably darker) territories very early in the series. Written by Robert Kirkman, famous for The Walking Dead, the series is tied into the larger Image Comics superhero universe, and features frequent recurring characters from Kirkman's other work, Invincible.