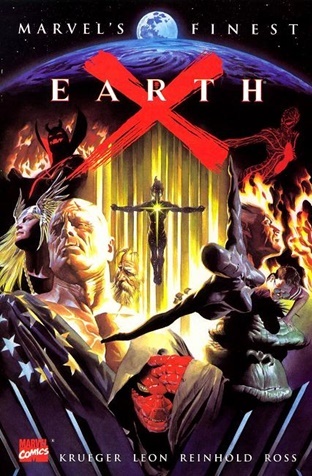 "All these years I thought it was power that brought responsibility. It's not. I was wrong. It's responsibility that brings power. It's knowing what needs to be done that brings strength. And courage. That's my daughter... And I won't let her remain a mindless slave of the Skull."
— Peter Parker
Advertisement:

Earth X is a 1999 Marvel Comics series of books. Based off of ideas by Alex Ross, it was written by Jim Krueger and drawn by John Paul Leon. This was originally created by Ross when asked by Wizard: The Comics Magazine to create a Marvel counterpart for DC Comics' legendary series Kingdom Come.

Flash Forward the Marvel Universe circa 1999-or-so 20 years in the future. Aaron Stack, the Machine Man, is awakened by a monolith. The black slab rips away his synthetic skin and human appearance and transports him to a lost city on the moon. There he is greeted by Uatu, The Watcher, who has been blinded. There, Aaron is told that he is to be the new Watcher, and to release all aspirations to be human.

Meanwhile on Earth, civilization has crumbled, and prominent heroes as well as villains across the world have risen to power to save their nations. America is under the control of Norman Osborn, the Goblin King. Across the world, people are enslaved to the parasitic Hydra. Tony Stark has armored himself in a sanitary skyscraper. Half of the Fantastic Four are dead. Marching up to the streets of New York is the mysterious Skull, who has built an army by controlling all he meets.

Oh, and everyone (and we mean literally EVERYONE on Earth) has super-powers. Nobody knows why.

And thus begins a journey from the dawn of the universe to its twilight, exploring the themes of heroism, empowerment, life, death, afterlife, and the cosmos.

The story continues in two other mini-series. In Universe X, the resurrected Captain Mar-Vell teams up with Captain America to help wage war with Death herself as the heroes deal with Earth's magnetic axis being shifted. Finally, in Paradise X, Earth's heroes try to hunt down a new Death as war is preparing to brew within the Negative Zone.

Not to be confused with the DC Alternate Universe that operates under Godwin's Law and Alternate-History Nazi Victory.