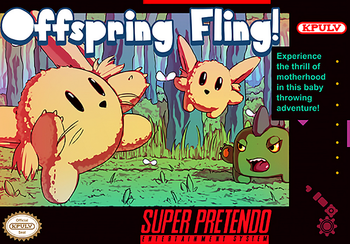 Yes, this is a fake SNES cover, complete with a seal.
Offspring Fling! is a Puzzle Platformer for PC, Mac and Linux created by indie developer Kyle Pulver and released on 30th March, 2012.
Advertisement:

You play as a mother forest creature whose children have gone missing, and you must go through over 100 levels to get them all back. The main game mechanic is to pick up and throw your offspring to solve puzzles, eventually getting all of them (and yourself) into the door at the end of each level. The Mother's Day 2012 update added a Level Editor, integrated online leaderboards and a "Sharing is Caring"