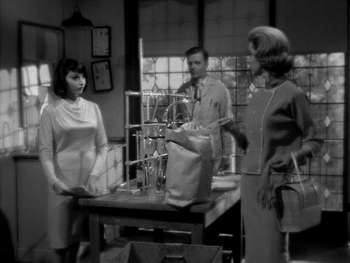 Regina, Ben, and Francesca; An un-bee-lievable Love Triangle.
The Control Voice: Human life strives ceaselessly to perfect itself, to gain ascendancy. But what of the lower forms of life? Is it not possible that they, too, are conducting experiments and are at this moment on the threshold of deadly success?

A queen bee turns into a human in order to create hybrids that'll take over the world.

The Control Voice: When the yearning to gain ascendancy takes the form of a soulless, loveless struggle, the contest must end in unlovely defeat. For without love, drones can never be men, and men can only be drones.