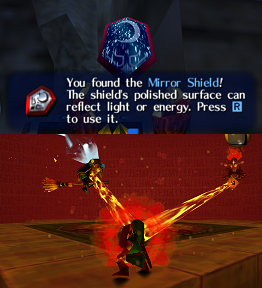 "Mirrors and magic are like oil and water; they repel each other and can't mix. If Winnie isn't careful, a spell could ricochet off a mirror and land where it wasn't supposed to."
— Free Spirit (2014) Introductory Page
Advertisement:

So you've got a villain shooting at you with his Ray Gun. You really don't want to get hit by it, and you know his A-Team Firing won't last forever... so what do you do? You take out your mirror and use it as a shield, and surprise, it reflects the ray right back at him.

Why does it work? Because in fiction, Mirrors Reflect Everything (except perhaps a vampire's image, but that's another trope).

This trope is when something that even remotely resembles a beam of light can be deflected using a mirror (and not a Magic Mirror, either, just an ordinary mirror), even though it realistically shouldn't have even stopped it. Or if you don't have a mirror handy, you can substitute anything reflective. Whatever was fired at you will always be deflected, perfectly, without any distortion or loss of potency.

Note: only non-justified examples belong here. If it's something that would make perfect sense for a mirror to reflect, like simple laser-light, or if the mirror is explicitly enchanted in a way that allows it to reflect such attacks, it doesn't count. This restriction is necessary to keep the trope out of chair territory.