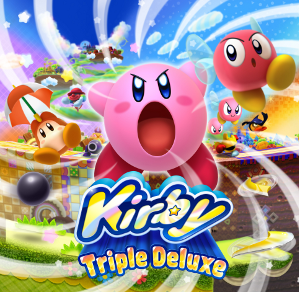 Wait until you see his Hypernova ability!
Kirby: Triple Deluxe (Hoshi no Kirby: Triple Deluxe in Japanese), released in 2014, is the first Kirby game for the Nintendo 3DS handheld system, and first original mainline handheld entrynote as in, traditional gameplay, unlike Kirby Mass Attack, and not a remake, which excludes Kirby Super Star Ultra since Squeak Squad.
Advertisement:

The plot revolves around the kidnapping of King Dedede, Kirby's on-again-off-again rival, by a spider-like entity named Taranza. Kirby himself witnesses the kidnapping after a strange beanstalk grows over his house and pulls it up into the sky along with Dedede's Castle, and chases Taranza through a series of floating islands known as Floralia, with the help of the beanstalk, referred to as the "Dreamstalk".

The gameplay is very similar to Kirby's Return to Dream Land with Kirby sucking up enemies and stealing their powers while heading to the goal. Such abilities now include Beetle, Bell, Circus, and Archernote Sniper in Japanese Kirby, along with a super powerful Hypernovanote Big Bang in Japanese Kirby that enhances his inhale powers Up to Eleven, allowing him to swallow trees and giant eels, or move wrecking balls to clear a path.

Like its predecessors, it features several minigames, namely Kirby Fighters, a multiplayer battle arena styled after Super Smash Bros. with players fighting with permanent copy abilities in a variety of classic Kirby locales, and Dedede's Drum Dash, a Rhythm Game starring King Dedede and featuring remixes of various classic Kirby songs, as Dedede jumps on drums and avoids enemies to the beat. Both minigames received standalone Updated Rereleases as Kirby Fighters Deluxe and Dedede's Drum Dash Deluxe, with the former getting a sequel on the Nintendo Switch as Kirby Fighters 2.

This game got a sequel in 2016 on the same handheld: Kirby: Planet Robobot, using the same engine and mechanics (such as traveling between foreground and background) as in this game.