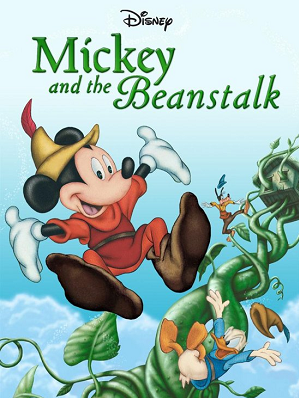 Jack and the Beanstalk is one of the most iconic fairy tales, and as such, it is often parodied in media. These works will most often involve a giant beanstalk leading to a castle in the clouds, inhabited by a giant. The giant will often be guarding a Damsel in Distress (most commonly, a living harp), a goose that can lay golden eggs, a vast amount of treasure, or any combination of the three. Some works may also have the twist that the giant may not actually be that big, and is using the castle as compensation for his diminutive size. This trope is more commonly seen in surreal works, but in works more grounded in realism, this will often be used as story being told to the works' characters or used as an Imagine Spot by one of the characters.
Advertisement:

In video games, this trope is used when a level (usually a Level in the Clouds) takes place on a giant beanstalk. This may often involve fighting giant insects and walking across clouds, and you might even have to fight a giant at the end of the stage.

A Sub-Trope of Fairy Tale Episode and Journey to the Sky. Compare Cinderella Plot, another fairy-tale reference trope.