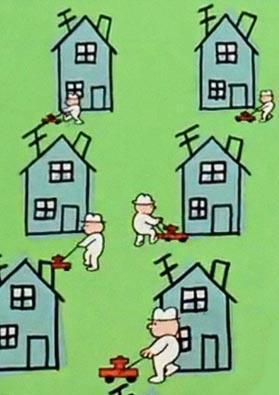 The House That Jack Built is a 1967 animated short film (eight minutes) directed by Ron Tunis, produced by the National Film Board of Canada.

Unsurprisingly, it's inspired by the English nursery rhyme "The House That Jack Built". In this version Jack is a suburban husband and white-collar worker who is frustrated with his humdrum existence and wishes to be "unique". The nursery rhyme is mashed up with "Jack and the Beanstalk" when, after Jack wrecks his car, a mysterious stranger offers to trade him three magic beans for the car.

It is available on Youtube through the National Film Board's official channel. You can see it for yourself here

Absolutely NOT to be confused with the 2018 live action film. Though they have the same name they are absolutely not affiliated with each other.