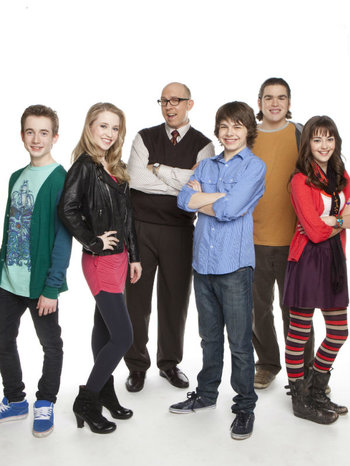 Who you calling "kid"?
Advertisement:

Mr. Young is a Canadian teen sitcom made by Nelvana (one of their few non-animated creations) for YTV which debuted in 2011 and ran for three seasons consisting of 80 episodes total until 2013.

Having graduated from college at a relatively early age, 14-year-old Adam Young (Brendan Meyer) is hired by Finnegan High School as the science teacher. Adam tries to prove that he has valuable contributions to make to the strict, but cowardly Principal Tater (Milo Shandel).

In the meantime, he runs into an old friend, the dumb and sometimes troublemaking Derby von Derbotsford (Gig Morton), gets hounded by the class bully Jordan "Slab" Slabinski (Kurt Ostlund), a closeted science lover and ballet dancer, deals with the hang ups of his materialistic older sister Ivy (Emily Tennant) and falls for one of his students, the sweet and nice, but easily fooled Echo Zizzleswift (Matreya Fedor).

Many of the plots involve Adam's attempts to win Echo over (they usually revolve around him either trying to get her interested in him or needing to find a means of hiding his feelings for her in a sensitive moment).

The show's universe is that of an exaggerated and cartoonish one where reality is rarely followed and often nonsensical. The show has become highly popular, is adored by YTV, and includes a surprising amount of unnuendo. All three seasons are available for streaming on Netflix and Tubi.