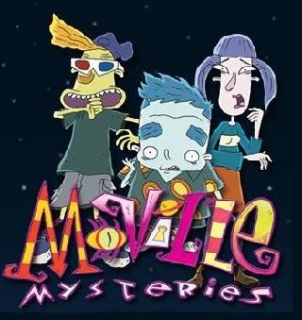 "Here's where it gets weird."

Moville Mysteries is a Canadian animated Horror Comedy/Mystery Fiction television series from Nelvana that was created by American artist, author, and animator Guy Vasilovich (whose previous forays in animated television were in the Oh Yeah! Cartoons shorts "Earth to Obie, "Lollygaggin", "The Boy Who Cried Alien" and "Elise: Mere Mortal").

The series stars Mosley "Mo" Moville (voiced by Frankie Muniz), a huge fanatic for all things freaky and mysterious who attends Lone Pine High with his friends Mimi Valentine (Tara Spencer-Nairn) and Tommy "Hitch" Hitchcock (Dan Petronijevic). These three ordinary teenagers live in Ouigee Falls, a not-so ordinary little town where strange happenings occur every day. No matter where they go, Mo and his friends are brought into encounters with the unexplained, the bizarre, and the outright supernatural around their town, whether it be the trio investigating urban legends and paranormal activity a la Scooby-Doo or following stories of their neighbors and classmates having direct run-ins with unusual events and other general weirdness in a sort of anthology style.

Think of it as what would happen if you took The Twilight Zone (1959), Are You Afraid of the Dark?, Alfred Hitchcock Presents, Goosebumps, The Outer Limits, and Tales from the Crypt, threw them all into the blender, and then turned the results into a cartoon.

The show premiered on September 7, 2002 and concluded in May 14, 2003, running for 26 episodes over 2 seasons. It originally aired on YTV in Canada, but also popped up internationally on Fox Kids (and later Jetix), although the series never made its way to the United States despite Fox Kids owning the show's broadcasting rights in that country.