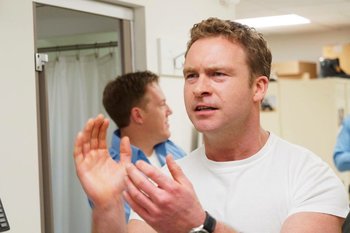 Daniel Petronijevic (born March 28, 1981) is a Canadian actor of Serbian descent who has appeared in various feature films, TV shows, and animated series.

Having made his acting debut in high school when an agent spotted him at a performance for a school play, Dan Petronijevic has since made notable appearances in Canadian TV shows like the English adaptation of the acclaimed Montreal-based police drama 19-2 (as the antagonistic police officer J.M. Brouillard), the anthology crime drama Cardinal (as the drug enforcer Leon in the show's second season), and the sitcom Letterkenny (as the clench-jawed Agricultural Hall president John McMurray, who shares his Serbian ancestry). Incidentally, the creator of Letterkenny, Jared Keeso, co-starred with Dan Petronijevic in 19-2.

Dan Petronijevic also has an extensive career in voice acting for cartoons, where he's usually typecast as The Big Guy, the Cool Big Bro, or a "dudebro" type. He's had leading roles in several Nelvana series, such as Braceface, Di-Gata Defenders, and Moville Mysteries, but has also done many anime dubs. However, his most iconic role would have to been in Fresh TV's hit Total Drama series, where he voices the upbeat party animal and surfer dude Geoff. He also became the official announcer for Canada's national cable animation network Teletoon after its rebranding in 2007.