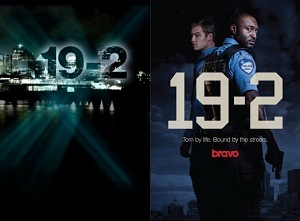 The French poster (left) and the English poster (right) for 19-2.
Advertisement:

19-2 is a Canadian-made Police Procedural drama television series set in the Greater Montreal Area of the province of Quebec in Canada. There are two version of the show. The first one is the original French-Canadian version produced in French under the direction of Radio-Canada, with the first episode aired in 2011 for three seasons and starred Claude Legault as Benoît "Ben" Chartier and Réal Bossé as Nicolaï "Nick" Berrof. The other is the English-Canadian adaptation in English under the direction of Bravo Channel

, starring Adrian Holmes and Jared Keeso as Nick Barron and Ben Chartier respectively with the first episode of the English-language remake airing in 2014. The French version has a total of three seasons being aired with the third season being the last while the English version has four season with Bravo renewing the last season with 8 episodes. However, CTV will be responsible for airing all of it instead of Bravo.

The series centers on the lives of police officers working under the Service de Police Métropolitain police force, stationed in "Station 19", as they work to protect the residents of the Greater Montreal Area while they try to balance their personal and professional lives. The shows center on Nicolaï "Nick" Berrof/Nick Barron, an experienced police officer who was able to return to active duty after his partner, Jean-Pierre Harvey, was shot by an armed intruder while answering a call on a break-in. The SPM decided to partner Nicolaï "Nick"/Nick with another officer named Benoît "Ben"/Ben Chartier, who had transferred to Montreal from the Sûreté du Québec. But unknown to the SPM, Ben is still acting under covert orders from the SQ in order to assess whether the SPM has a mole working on behalf of Montreal-based criminals or not.

Both series contain examples of:

The French version contains examples of:

The English version contains examples of: