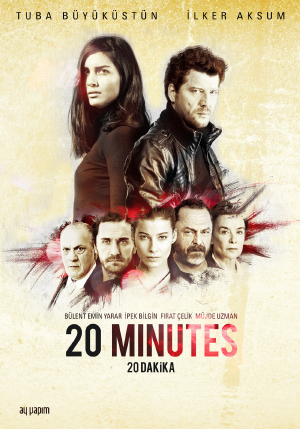 I know something crucial you don't: no matter how many years you've set your life right, it takes but 20 minutes to take it all away.

Ali and Melek Halaskar are a happily married couple who live in Istanbul with their two children, Duru and Yağız. Melek is a successful baker and businesswoman, having established her own bakery, while Ali teaches history at the local high school. With the last installment of the mortgage finally paid, the picture-perfect family is set to achieve their dreams.

Everything changes the night Melek is arrested for the attempted murder of Kerim Solmaz, son of the city's powerful — and unforgiving — mayor. With damning evidence against her and the only witness on life support, Melek is judged guilty and sentenced to twenty years in prison.

Dogged by a vindictive enemy and aided by allies with ambiguous motives, Ali scrambles to uncover the truth and free his wife, while his children adjust to a life without their mother. Meanwhile, Melek struggles to adapt to life behind bars. Singled out for abuse by a merciless warden intent on breaking her will, she resolves to endure and resist from within. Yet as she maintains her innocence, serious questions begin to emerge about the day of the incident — and ultimately, Melek herself.

The premise of the series was inspired by the 2010 American film The Next Three Days, but significantly differs and diverges from its basis in key ways (for details, see Adaptation Deviation below).