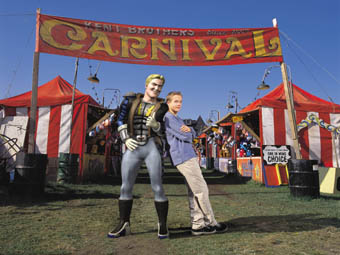 Get up, go to school, play videogames, save the world, not necessarily in that order.

At first glance, Ace Lightning could be suspected of being pulled straight from the pages of a videogame-related Fan Fiction. What it actually is, however, is a 39-episode series which ran from 2002 to 2004. It was created as a collaboration between Canadian and British entertainment industries. Many fans believe it was Screwed by the Network.

Ace Lightning was one of the first weekly television shows to involve CGI animated effects as a substantial part of every episode, making the show both Western Animation and Live-Action TV. The series was filmed live-action with the video game characters Ace created in 3D digital and blue screened in afterwards.

The protagonist is 13-year-old Mark Hollander, who has just immigrated to North America from England. However getting to grips with life on the other side of the pond turns out to be the least of his problems, when, on the first night in their new home, the antenna of Mark's house is struck by lightning. As chance would have it, Mark was at that exact moment engaged in his favorite video game: Ace Lightning and the Carnival of Doom, and had discovered a level which wasn't supposed to exist. Turns out this isn't an ordinary copy of Ace Lightning. The next thing Mark knows the characters of his video game - good and bad alike - have come to life and are engaging in battle in his back yard. Mark is somewhat reluctantly elected as Ace Lightning's new sidekick, and dragged into a quest to locate the seven shattered pieces of The Amulet of Zoar which will give its wielder power over the entire universe.

The Big Bad of the series is Lord Fear, who has a grudge against Ace for accidentally crippling him and then imprisoning him in the game world. He along with his minions, Staff Head, Lady Illusion, Anvil, Pigface, and Dirty Rat, occupy the rundown Kent Bros. Carnival, renaming it the "Carnival of Doom" after their old stomping grounds.

Ace and the villains are convinced that the real world is just another level from the game (albeit, from their perspective, a rather strange one), and treat it as such. Mark's new life just became a lot more complicated.

While Mark is initially reluctant, and Ace is naive about the way things work in "Reality", the two of them develop an understanding which grows into friendship. As the show goes on more characters arrive, both good and evil, and eventually we have the arrival of the mysterious Master Programmer, and his avatar, the new head villain: Kilobyte, who makes Lord Fear look like a mewling bag of kittens.

The series starts out as a jaunt into the world of One Boy and His Superhero and later develops into a mire of Good Versus Evil, the nature of emotions in Artifical Beings, complex social networking while saving the world in your spare time, the nature of what is truly 'real', and even vague suggestions of Necrophilia and Metaphysical Ethics for the more observant (or obsessive) members of the fandom.

For most, however, it's just a show about a superhero completely out of his depth in the real world, and a boy trying not to let his newfound 'hero' status impact on his social life. You know. The usual.

Ace Lightning regularly attempts to mock the tropes associated with the Superhero genre and at no point tries to hide from the fact that it is, essentially, a superhero parody that occasionally plays things straight. Every CGI character in the show is a stereotype of more traditional heroes. You've got your spunky red headed sidekick, your bewitching black widow, and your villain who just happens to look like a living skeleton. Ace is a typical superhero; super strong, super fast, able to shoot lightning energy from his hands, and surviving on electrical power sources. Ace Lightning shows the audience what really happens when you stick a person with those kinds of abilities into a world which wasn't built to accommodate them. The humans meanwhile, are normal (mostly) people living ordinary lives which contrast garishly with the superheroes. And while Ace is learning the finer points of humanity from Mark, Mark is learning that sometimes, a hero's gotta do what a hero's gotta do.

Ace Lightning has a small but loyal fanbase which, oddly enough, seems to contain a great many teenage females as well as the show's original demographic of 10-to-14-year-old boys.