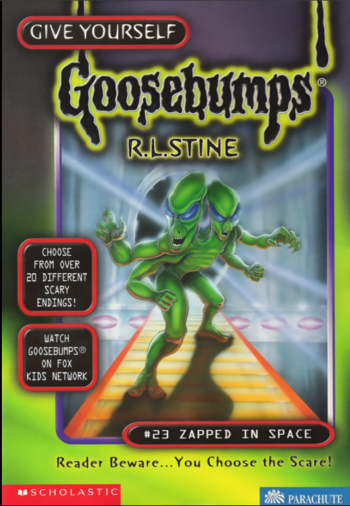 The Give Yourself Goosebumps book where a visit to a video arcade gets you more fun than bargained for.

You and two friends, Katy and Jordan, are excited to be among the first visitors to Madam Zapp's new Virtual Reality video arcade, where video games comes to life. But you would've never guessed how literal that statement was...

There's a choice of two arcade games for you to choose from, the sci-fi arcade shooter "Adrift Off Vega", and the Arctic-themed adventure "Abominable Snow Woman". While your friends Katy and Jordan both selects the first game, you're free to pick either of the two, where you will either end up battling hostile Arcturian aliens in a space adventure or struggle to survive the freezing wintery wastelands by yourself.

Zapped in Space provides examples of: