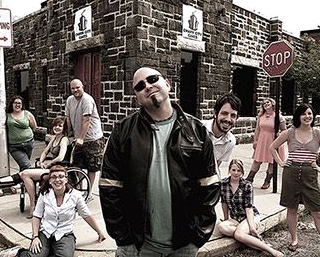 "We do it all—make it bigger, make it badder, make it awesome! For me, it's all about the cake!"
— Duff Goldman, from the opening narration
Advertisement:

Ace of Cakes is a Docu Soap about Charm City Cakes, a custom cake bakery in Baltimore, Maryland, run by a man named Duff Goldman. The show revolves around the wacky hijinks of Duff and the staff, the making of the cakes (each episode revolves around a select few and especially complex cakes), and the reactions of the people receiving the cakes.

The show lasted from August of 2006 to February of 2011, for a total of 115 episodes in ten seasons, as the average season lasted less than five months. During its run, it was one of Food Network's highest rated shows.