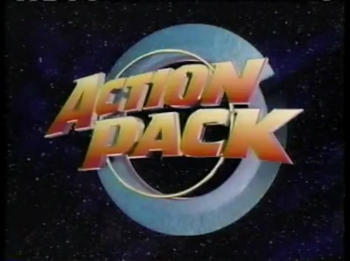 Universal's equivalent of PTEN, a syndication package composed initially of backdoor pilot movies (being almost a blend of a package and a Wheel Program early on). For most of its existence, the Action Pack was a two-hour block consisting of Hercules: The Legendary Journeys and Xena: Warrior Princess. It was more successful than PTEN (if only barely), but it too folded in 2001 after Xena came to an end.

Shows and/or telemovies which were syndicated under the Action Pack branding included:

You could consider Universal's animated series Exosquad and Monster Force as being related to the Action Pack, but not part of it, since they aired right around the time the Pack came to TV and were (allegedly) broadcast together as the Universal Action Hour. Also related was a previous attempt at an ad-hoc network from Universal, the Hollywood Premiere Network that aired in the 1990-91 season, which featured She-Wolf of London, Shades of LA (about a detective who can see spirits trapped in limbo), and They Came from Outer Space (a sitcom about two alien fratboys traveling through America); that effort didn't last.