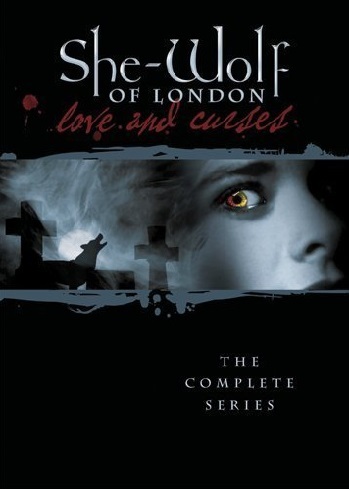 She-Wolf of London, also known as Love and Curses, is about American grad student Randi Wallace, who travels to England to study with mythology professor Ian Matheson. While on a solo research trip out to the moors, Randi's attacked by a werewolf and turned into one herself. The duo then place a classified ad in the paper, advertising their services as occult investigators in the hopes that some case will lead to a cure for Randi's condition.
Advertisement:

It was produced by Universal as part of their syndicated Hollywood Premiere Network, an attempt to create an ad-hoc TV "network" that got cancelled after the 1990-91 season (and in turn was the genesis of the Action Pack Universal created a couple years later).

The first 14 episodes were a US/UK coproduction, filmed on location in England. After that, the English backersnote ironically the UK company involved was HTV, the ITV franchise that served Wales and the West of England at the time, despite the show's title. dropped out, and the show was retooled and relocated to Los Angeles.

Has no relation to the 1946 film of the same name.