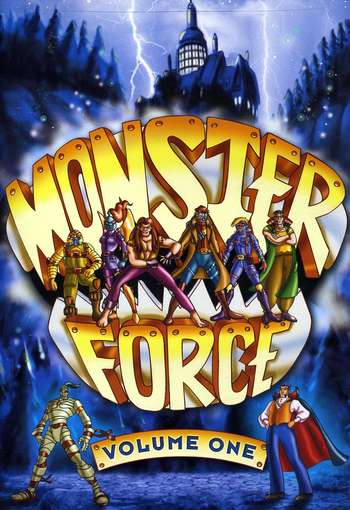 A Monster of the Week cartoon about a scientist and three teenagers, including the (female and psychic) descendant of Doctor Frankenstein, wearing Powered Armor and fighting classical Universal Monsters alongside Frankenstein's Monster and the teenage grandson of the Wolf Man. Produced by Universal Cartoon Studios and Lacewood Productions in The '90s (hence, it was paired with fellow Universal action series Exo Squad in first-run syndication). The show is also noticeable for having comic book writer Marv Wolfman as one of the show's writers which explains the quality behind some of the stories.

Alas like a lot of syndicated cartoons of the 90s, it got lost in the crowded market of similar toy based shows leading to a short run at 13 episodes. At the least the first seven episodes have been released on DVD, so if you haven't heard of the show, you can go look for it now.

Not to be confused with the Game Boy Advance game of the same name.