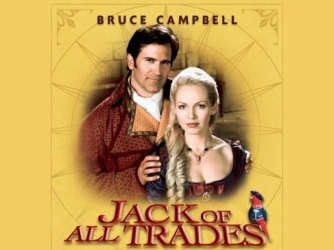 Jack of All Trades was an action/comedy show that ran for one-and-a-half seasons in 2000, paired with Cleopatra 2525 as part of Universal/Studios USA's syndicated Action Pack. Set in 1801, it is a spiritual relative of Steampunk series like The Adventures of Brisco County, Jr.. and The Wild Wild West, starring Bruce Campbell as Jack Stiles, an American secret agent sent to the fictional French-controlled island of Palau-Palau. Once there, he meets his British contact and Slap-Slap-Kiss love interest, fellow spy Emilia Rothschild, and together the two work to stop Napoléon Bonaparte and other threats to the United States. To the public, Jack serves as Emilia's mild-mannered manservant, but when trouble strikes, he transforms into a masked hero, the Daring Dragoon.

A fun little series with a truly great (and, to the crew's surprise, Emmy Nominated) theme song

Not to be confused with the trope Jack-of-All-Trades.