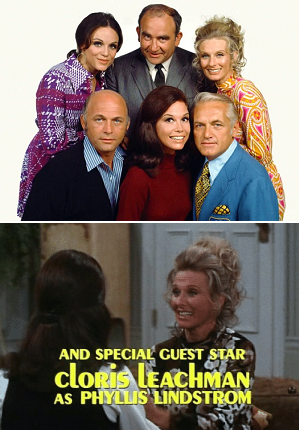 Cloris Leachman was part of the main cast in all but billing.
An actor who is, to all outward observation, a member of the regular cast, but who still receives guest billing. This usually has something to do with their contract and whether or not it stipulates that they receive main cast billing (and possibly with how much they get paid), though in some cases, it may be done as a gimmick to call attention to an actor whose reputation vastly exceeds that of the rest of the cast.
Advertisement:

This can also happen if a guest star becomes an Ensemble Dark Horse and is written into future episodes to capitalize on their unexpected popularity, which may eventually lead to a Promotion to Opening Titles. Other times, however, they remain guest stars due to difficulties modifying the opening titles.

Often with many cases exclusivity can have an effect. If a cast member is a regular, then that show has them somewhat "locked down," and they have to stay at the cost of other projects. However, if they're merely a "guest star," that can often give them the freedom to work on other projects if they want to.

Occasionally, you even see a "Special Guest Star" credit on a movie. How exactly someone can "guest star" in a production that doesn't have a regular cast is left as an exercise to the reader.

Compare Advertised Extra, where a character who is supposed to be part of the main cast ends up feeling like a guest star. Also compare Award Category Fraud and "And Starring."