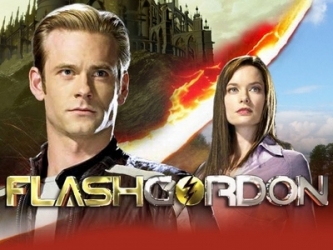 Flash Gordon (2007-2008) was a Sci-Fi Channel adaptation of the comic strip of the same name, incorporating material from previous adaptations. The plot follows Flash as he discovers a rift in space leading to the planet Mongo, ruled by an evil dictator who controls the planet's water supply.
Advertisement:

In the beginning, the show had a Monster of the Week format. After negative critical reactions, a mid-season retool shifted the focus to a Mongo-based story arc. Despite this effort, Flash Gordon was canceled after one season, ending on a cliffhanger, although most plotlines were resolved.