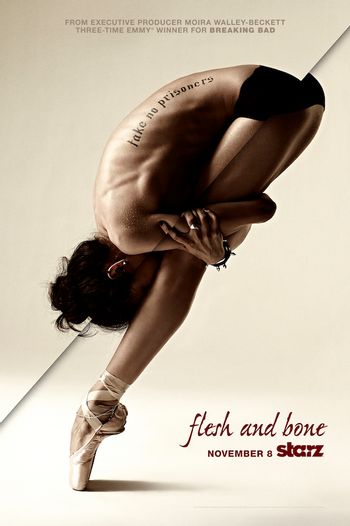 Flesh and Bone is a Starz mini-series, consisting of eight episodes. While it was first conceived as a longer-running show, Starz confirmed its re-tooling as a limited series in October 2015.

The plot follows Claire Robbins, a young dancer from a Pittsburgh working-class family, as she runs away to New York and joins the American Ballet Company. Introduced from the beginning as the fragile product of a very seriously disturbed home-life, Claire's luck does not improve as she is thrust into the unforgiving arms of the company, complete with its outright abusive Artistic Director and cutthroat fellow dancers. The situation is only further complicated by Claire's increasing involvement with a Russian mobster and the arrival of a disturbed figure from her past.

Flesh and Bone contains examples of: