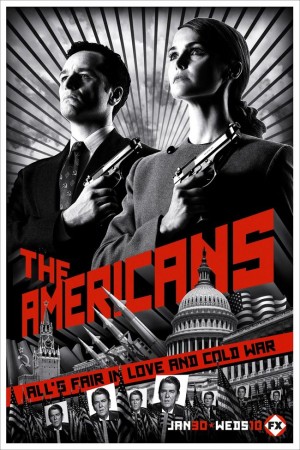 The Cold War Just Got Hotter
Elizabeth: You loved it here. You started loving it more and more. Now look what finally happened.
Philip: I fit in! I fit in, like I was supposed to. And, yes, I liked it. So what?
Advertisement:

The Americans is a television drama that aired on FX from 2013 to 2018. Created by former CIA operative Joe Weisberg, Keri Russell (Felicity) and Matthew Rhys (Brothers & Sisters) play Soviet deep cover agents masquerading as Elizabeth and Philip Jennings, a married couple living in the suburbs of northern Virginia in the early 1980s. Noah Emmerich plays Stan Beeman, an FBI counterintelligence agent hunting for Soviet spies like Mr. and Mrs. Jennings, and he's just moved in across the street.

The series juggles the balance between the domestic and the spy plots, organically interweaving Philip and Elizabeth's concerns about their constructed marriage and family while they do their job as KGB agents.

There are similarities with the film Little Nikita, but in this case being much more from the parents' perspective.