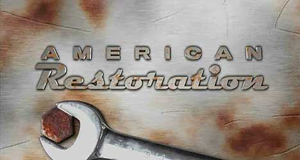 Remember back in the day when things were made by hand, and people took pride in their work? My name's Rick Dale, and I bring these things back to life. Every restoration has its own set of challenges. There's no owner's manual for what we do, but there's no job we can't handle.
— Rick Dale, opening narration
Advertisement:

American Restoration (also called Kings of Restoration overseas) is a show on The History Channel.

Viewers were first introduced to the star of the show, Rick Dale, by his appearances on Pawn Stars, where he is the preferred restoration specialist of its protagonist Rick Harrison, owner of the World Famous Gold & Silver Pawnshop. Finding that Rick Dale was also an interesting fount of information, History decided to give him his own show to highlight the interesting work he does and his wacky cast of employees — Tyler, his son (from his first wife) and heir; Ron, his younger brother and picker/driver; Brettly, his stepson and resident New Meat; Kelly, Brettly's mother and Rick's second wife who handles their paperwork; Kowboy, the metal polisher; Kyle, Kowboy's best friend who deals with reassembly and finishing touches; and Ted, guest lettering artist and owner of Letter Perfect Inc.. Basically, think of a cross between Pawn Stars and American Chopper (which is amusing, considering that Pawn Stars is already a cross between American Chopper and Antiques Road Show).