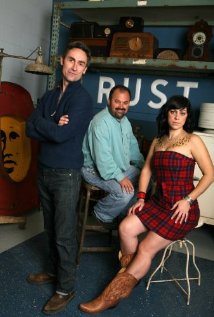 American Pickers is a Reality TV series that airs on The History Channel which follows Mike Wolfe and Frank Fritz around the country as they "pick" antique items for their shop, Antique Archaeology.
Advertisement:

"Picking" involves sorting through piles of what other people may consider junk in order to find items to resell. In many cases, the items turn out to be extremely rare and even the owners had no idea that they had any value at all, much less that the items are highly collectible. Among things found by the pickers are Indian motorcycles, antique bicycles, toys, advertising signs and furniture.

The pickers also have an eye for the unusual. They've picked a pair of giant Laurel and Hardy heads, a giant boot which once served as advertising for a western wear store, and a Piaggio Ape, which they were later told was likely the only one of its kind in North America.

When Wolfe and Fritz are on the road, their assistant Danielle Colby runs the shop, sells items to customers, and finds places for the men to pick.

The pickers also encounter many different personalities on their journeys. Most are happy to have someone come look though their stuff. Others would rather be left alone and there are at least two instances captured in the series where the pickers were rudely turned away.

American Pickers often airs on The History Channel alongside episodes of the slightly similar series Pawn Stars (both shows, and the various Pawn Stars semi-spinoffs are produced by Left Field Productions).

Although not related to the adventure game Pickers: Adventures in Rust, one could argue that it was inspired by this show.