Literature / The Pillars of Reality 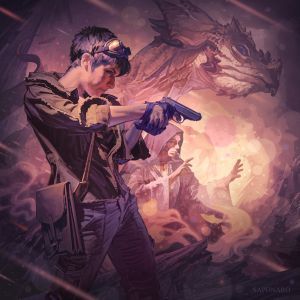 The Pillars of Reality is a series of Fantasy-ish (perhaps Science Fantasy) novels by John Hemry (aka Jack Campbell). They mark a departure from his more normal straight Science Fiction work (such as The Lost Fleet). So far, there are twelve books set in this world — the original series had six books, and a follow-up series called The Legacy Of Dragons had three, and the Empress of the Endless Sea prequel series also has three.

The original series consists of:

The sequel series (The Legacy Of Dragons) so far consists of:

There is also a prequel series (Empress of the Endless Sea) about Mari's ancestor Jules of Landfall consists of:

The world (called Dematr) is dominated by two rival Guilds, the Mages and the Mechanics. Each Guild guards its secrets jealously, while insisting that their enemies are frauds and charlatans. Both hold the commons (people who aren't part of either guild) in disdain, and are in turn greatly resented. They exercise strict discipline over their members; joining isn't optional, independent operators are eliminated, and questioning official doctrine results in harsh punishment. The system is beginning to crack, but the Guild leaders are more likely to shoot the messenger than try to fix anything.

The story starts off when Mari, a Mechanic, and Alain, a Mage, are thrown together in the aftermath of a bandit attack. They're forced to work together to survive, and from their interaction, they start to learn that a lot of what their Guilds have told them — especially about the other side — is untrue.