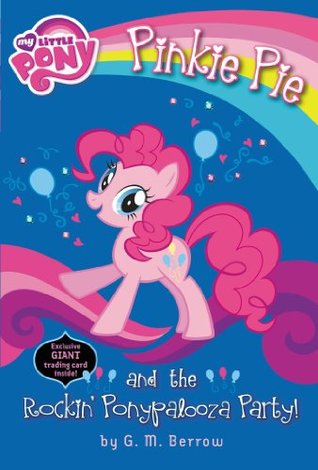 "When the family rock farm is in trouble, Pinkie Pie tries to help in the best way she knows how—by planning a Ponyville 'rock' concert: Ponypalooza! The party will be super-duper cool and is sure to save the farm. But...Pinkie's family doesn't like the idea and wants her to be serious for once in her life. What's a pony to do?"
Advertisement:

The second officially licensed My Little Pony: Friendship Is Magic chapter book of a series of books by G. M. Berrow, and part of the overall My Little Pony (Generation 4) universe. Just like Twilight Sparkle and the Crystal Heart Spell, this also takes place some time after season three. This book is centered around Pinkie Pie and it expands more on her family by giving them official names and personalities. The main source of conflict for this book is the huge differences between Pinkie's exuberant personality and her family's stoic-ness.