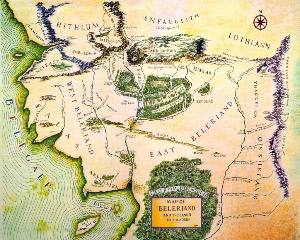 Ever noticed how many fantasy maps will detail the ocean on the left, western side? In many cases there won't even be an eastern or northern shore; however, there may be a southern shore.

The main reason for this is the popularity of Medieval European Fantasy. A Fantasy Counterpart Culture of Medieval Europe will naturally imitate the geography of Europe: ocean to the west and vast stretches of land to the east. For the same reason, the north is often a harsh tundra full of barbarian tribes, the east a mysterious land whence ride the Hordes from the East, and the south a hot land of jungles, tropical islands, and savages.

An interesting historical aside: Throughout most of the middle ages, maps were drawn with East at the top, rather than North. (This is how the word "orient" came to mean "face the correct direction.") A fantasy map that followed this convention would be bottom-justified, instead of left-justified.

When an Expansion Pack World is applied, this trope often leads to an Eastward Endeavor, or sometimes to a Quest to the West if the characters are interested in crossing the sea.